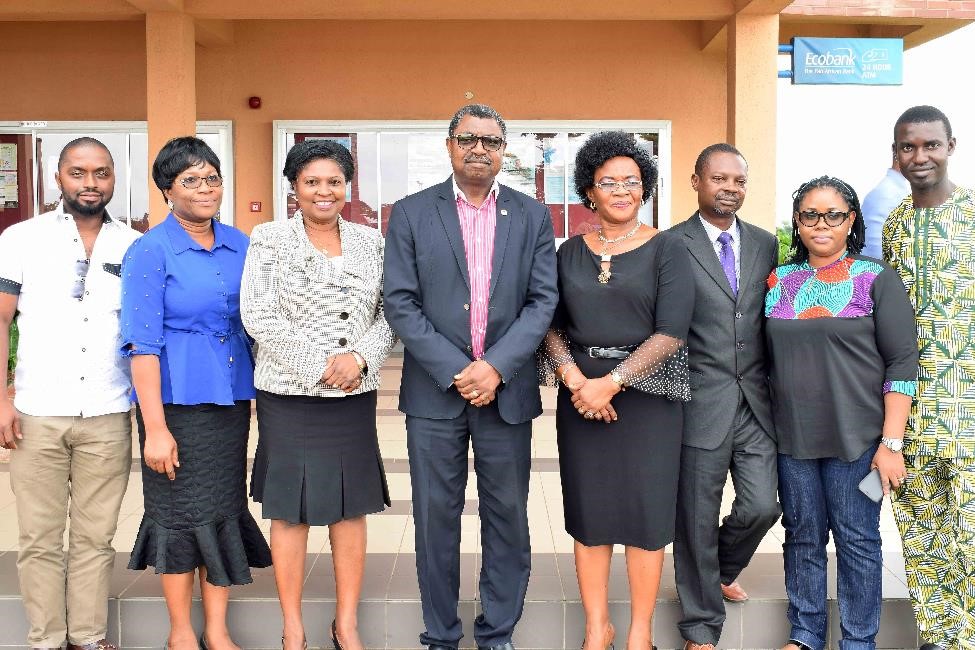 The National Universities Commission sent a team to AUI to inspect the University, after three years of operation. The inspection was to see if the provisional license given to the University in March 2015 could be renewed to a statutory license, so the University could operate better.

The team, made up of Mrs. L. N. Achor (Chairman), Dr. Mrs. Esther Nmela, Mrs. Ojeh Mary and Mr. Egekwu Ikoku arrived on campus on the 30th of July, and was received by the Chairman of the Governing Council, Chief Gilbert Grant; the Vice-Chancellor, Prof. Steve Afolami; the Registrar, Mrs. Margaret Aziba; the Bursar, Mr. Sunday Alabi, the Senior Librarian, Mr. Adeyinka Oshilalu and other members of staff.

While welcoming the team, Chief Grant said that the Council was impressed with the efforts of the Vice-Chancellor in steering the ship of the University while ensuring high standards was maintained. According to him, the owners of the University take adherence to standards seriously, as they have had stakes in education for over 150 years. He expressed his happiness at having the team around to see how far the University had come.

The Chairman of the Team, Mrs. L. Achor extended the greetings of the Executive Secretary of the National Universities Commission, Prof. Abubakar Rasheed. She also said the Team was honoured by the presence of the Chairman of Council. Furthermore, she stated the purpose of their visit, which was to see how well the University had fared and also note areas of deficiencies so they could give salient advice to the University to ensure improvement.

The Team Lead highlighted their schedule for the visit, with the first day being interactions with the principal officers and some selected staff, with the focus on the management and governance of the University, as well as a perusal of documents to ensure the University is in line with the stated guidelines of the NUC. The second day would be for the inspection of physical facilities owned by the University. The team would then have a statement of facts, which would be their impression and observations on the University.

During his interaction with the Team, the Vice-Chancellor said that it was important to the Principal Officers that the laid foundation was strong enough for people who came after to uphold the standards. He also mentioned that the University had 134 students and ran an eighteen weeks (18) semester, with fifteen weeks of lecture, one week of revision and two weeks of examinations. Also, because the University was Information and Communications Technology compliant, results of examinations were sent minutes after the results were approved by Senate and also, parents had access to their child’s results through the University portal.

On the subject of the University’s relationship with the mentoring University, the University of Lagos, the Vice-Chancellor said that the relationship had been good. He mentioned that Professor Alor had visited AUI, and AUI had paid a similar visit to UNILAG as well. Also, UNILAG had released academic staff when AUI needed and also sent lecturers as experts on AUI’s interview panels. Also, UNILAG had moderated examination questions when there was no Professor or a Senior Lecturer in that department.

Also, the Vice-Chancellor said although no union activity was allowed on campus, but there was a Students’ Welfare Committee, a Senate Committee, chaired by the Dean of Students’ Affairs. Also, the Disciplinary Committee disciplines erring students, as the University tries to reform students as opposed to expelling them.

At the end of the inspection visit, the Team Lead thanked the Management for its hospitality and mentioned some of their observations. She said the University needed to have a substantive Director of Academic Planning, as the DAP was the link between the University and NUC. She also noted the need for a Quality Assurance Unit. She also mentioned the need for the expansion of the University Library. She said it was important that the units in the Bursary were better demarcated and if need be, more hands hired to man the Unit. She noted that the office of the Counselor shouldn’t be in the Administrative Building so as to ensure the privacy of the students.