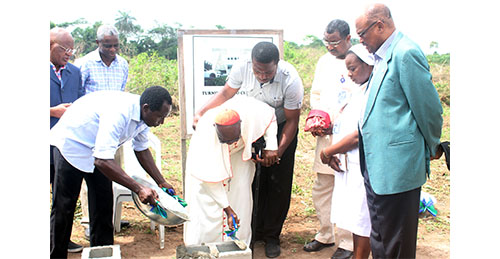 The symbolic “TURNING OF SOD” ceremony for the Faculty of Law Building of Augustine University held on Wednesday, 5th April, 2017. The ceremony signaled the official commencement of the construction of the building on the campus of the University.

The ceremony was attended by the Visioner of the University, His Eminence, Anthony Cardinal Olubunmi Okogie, , the Chairman Board of Trustees, Sir Steve Omojafor OON, Chairman Governing Council of the University and Pro- Chancellor, Chief Gilbert Grant, the Vice-Chancellor of the University, Professor Steve Afolami  the Registrar, Mrs. Margaret  Aziba, the Bursar, Mr. Sunday  Alabi, the Senior Librarian, Mr. H. Oshilalu, the Deans of Faculties and of Students Affairs as well as other members of staff of the University. Others who were presents were the University Project Architect, Sir Femi Aina and some of the University building Contractors.

The Cardinal, the BOT Chairman and the Council Chairman took turns to lay the foundation blocks, accompanied with prayers. Thereafter, the Vice-Chancellor in a brief address thanked the Cardinal and the Proprietor as well as the Catholic Archdiocese of Lagos for their unwavering support for the University. He stated that the event marked another point in the march towards success in the University. He further assured all stake holders of the sustenance of their good works in the University. He prayed that God keep everyone alive to witness the official opening of the Faculty Building after completion.

The Chairman, Board of Trustees, Sir Steve Omojafor, OON in his remarks after the ceremony, said he believes that with the milestone achieved, there would be no resting on oars until the project comes to fruition. He added that the University would continuously maintain the standard already set and prayed that the support needed to take the University to great heights would never wane.

In his own remark, the Pro- Chancellor and Chairman, Governing Council of the University, Chief Gilbert Grant expressed joy at the feat. He further promised continuous support to the growth and sustenance of the University. He expressed optimism that despite the harsh economic reality in the country, the project would be completed in good time.