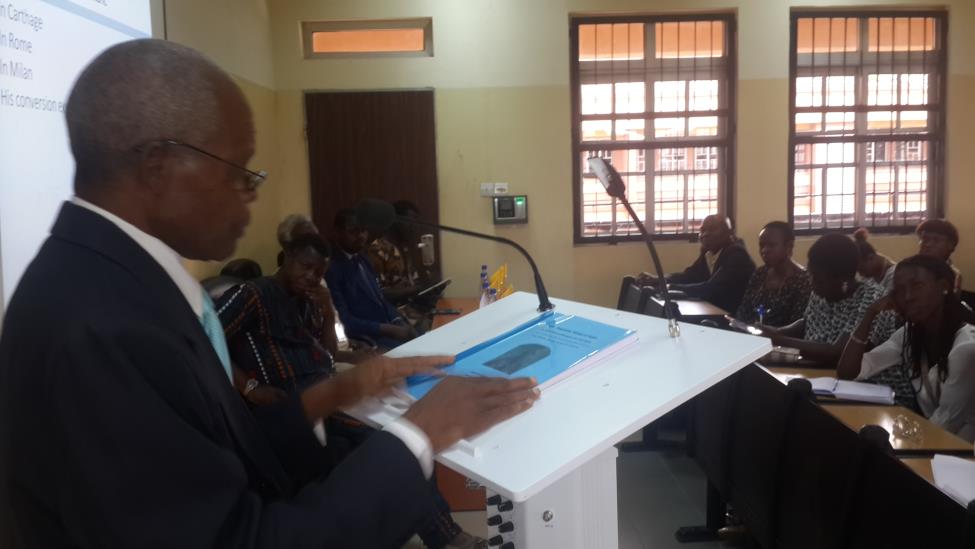 Augustine University held its third University-wide academic seminar on the 22nd of November 22, 2017 at Lecture Room 210. The seminar, which was presented by Prof. Joseph Omoregbe was titled “Saint Augustine the Great African Philosopher and Theologian.” The seminar is the first that would be organized by the recently constituted Public Lectures and Publications Committee (PULPC), headed by the Dean of the Faculty of Humanities and Social Sciences, Prof. Raji-Oyelade.

Augustine University was named after the famous St. Augustine of Hippo, a renowned philosopher and theologian, whose works continues to be relevant even till date. Prof. Omoregbe gave all in attendance a deep and important insight into the life of St. Augustine. St. Augustine was born in 354AD in modern day Algeria and was sent to Carthage by his father, who spared no expense to ensure he was well educated. Augustine, like many youths lived a care-free life and even embraced Manichaeism. He was so brilliant that by the age of 29, he was offered a professorship in Rome and he became a professor of Rhetorics. Augustine was made a priest and later became the Bishop of Hippo. Augustine stoutly defended orthodox Christian faith against heretics (the Arians, Donatists and Pelagians). Augustine was a prolific writer and he authored 113 books, 200 Letters and about 500 published sermons including Confessions, City of God and the Trinity. His philosophy tackled concepts such as Skepticism, Divine Illumination, the notion of human freedom and God’s foreknowledge of our future actions, war and many others. His works remain evergreen and continue to have positive impact on both Christianity and the secular world. St. Augustine died on 28th of August 430 AD at the age of 75.