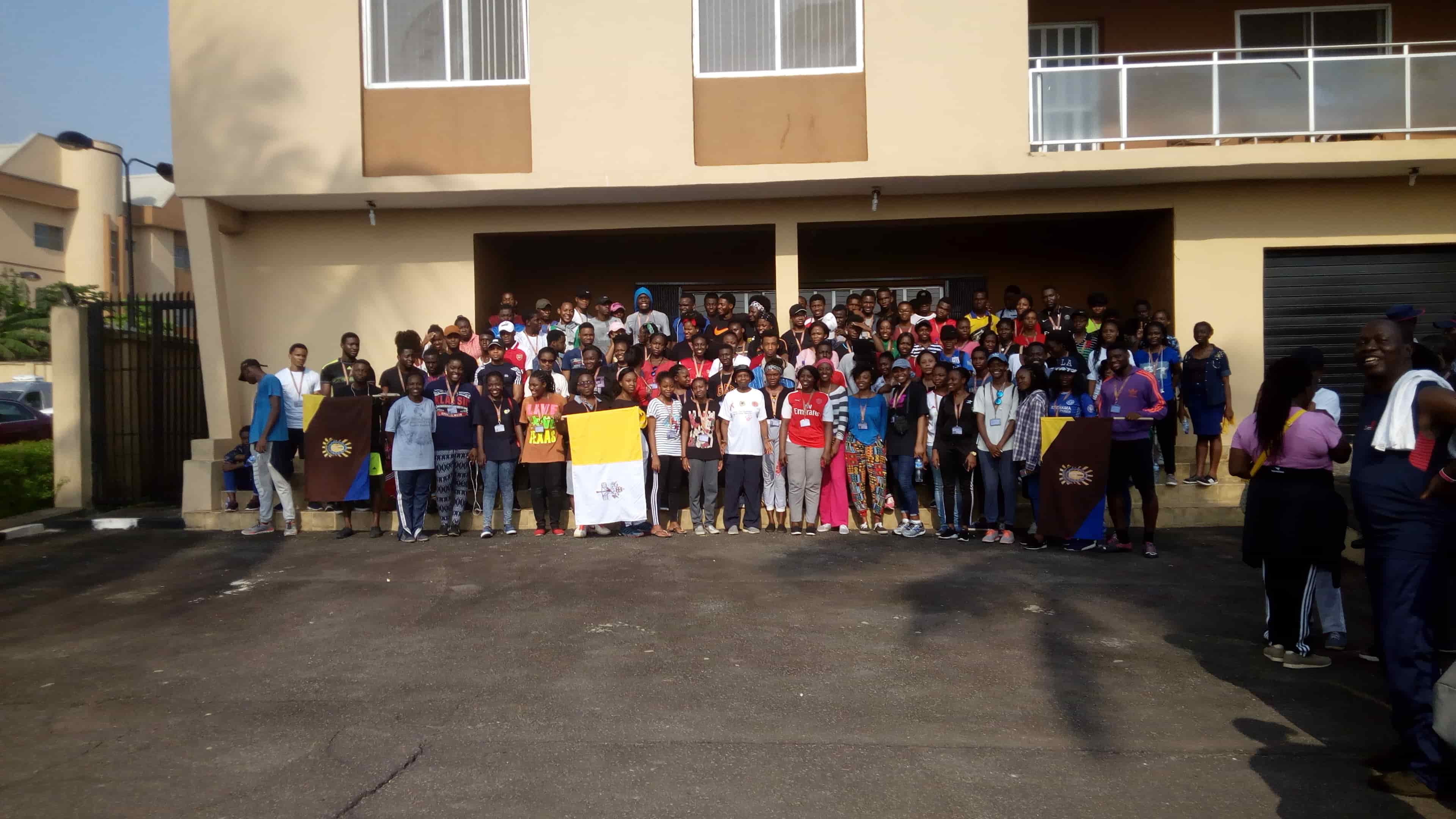 The annual Students’ Week of Augustine University was held from 11th to the 17th of June, 2018. The students’ week is a week of activities organized by students, to foster the relationship among them, engender the discovery and nurturing of students’ talents while also ensuring that knowledge was gained.
The activities for this year included treasure hunts, debate and public speaking, sport competitions, endurance trek, seminar, bonfire night among others.  The week started with the first round of the treasure hunt on Monday, the 11th and it ended with most of the teams losing out, leaving only a handful left to compete as individuals in the second round. The day ended with soul lifting praise and worship night at the University Chapel.
ENDURANCE TREK
The trek was led by the Chief Security Officer of the University, Mr. O. Daramola involved both students and staff. The trek terminated at the residence of the former Governor of Lagos State, late Chief Michael Otedola, where Lady ‘Doja Otedola, his wife, received the University community and admonished the students to study hard and be of good behaviour. Lady ‘Doja was presented a gift by Miss Chidera Nwakwo, a 200 level student of Computer Science.
SPORTS
The sports competition was between the Faculties of Science and the Humanities and Social Sciences. Students of the two faculties played for glory in the football and basketball competitions, which both ended in a draw.
TALK
The students were given an enlightening talk on the Nigerian stock market by Mr. Edikan Ekong of the Chartered Institute of Stockbrokers (CIS). He distinguished between the money market (short term financial market) and the capital market (long term financial market).
Furthermore, he enjoined those who had interest in stock broking to start with a diploma from CIS which could enable them work as sales agent. He added that employment opportunities were available for stock brokers in oil companies, stock broking firms as well as opportunity for entrepreneurship and self-employment.
BONFIRE NIGHT
The bonfire night was hosted by Iwu Agnes, a 200 level student of English department and Nzote Patrick, a 200 level student of Computer Science. The occasion was graced with the presence of the Vice-Chancellor, Prof. Steve Afolami; the Registrar and her husband, Prof. and Mrs Aziba; Acting Chaplain, Rev. Fr. E. Ogundele (Dr.) as well as other members of staff. Finger foods and drinks were made available for consumption and performances by two male students Naroblaze (Rufai), Damian and Ohis were the highlights of the night.
DINNER AND AWARDS
This took place on Saturday, 16th June, 2018. It was a night of glitz and glamour as the students trooped out in their various outfits for the annual event. It was a night to recognize students who had achieved various feats across the social, academic and sporting fields in the past year.
Here are the categories and the awardees:
Comic Act (Female)- Bello Racheal, 100 level, Computer Science department.
Comic Act (Male)- Ojaokomo Ayo, 100 level, Computer Science department.
Most Fashionable (Female)- Uwakwe Puriche, 200 level, English department.
Most Fashionable (Male)- Nwabiankea Peter, 300 level, Accounting department.
Most Intellectual (Female)- Odunwa Mercedes, 200 level, English department.
Most Intellectual (Male)- Onyia Emmanuel, 300 level, Economics department.
Most Sociable (Female)- Nwankwo Chidera, 200 level, Computer Science.
Most Sociable (Male)- Babatunde Owoyele, 100 level, Philosophy and Religious Studies department.
Personality of the Year (Female)- Nwadinigwe Clara, 300 level, English department.
Personality of the Year (Male)- Ireroa Collins, 300 level, economics department.
Sportsman of the Year- Chioba Julius, 200 level, Economics.
Sportswoman of the Year- Nwankwo Chidera, 200 level, Computer Science.
Most Valuable Player (Basketball)- Achonwa Augustine, 300 level, Accounting department.
Most Valuable Player (Football)- Momoh Sebastian, 100 level, Computer Science department.
Fresher of the Year- Omeje Remy, 100 level, Computer Science department.
Student of the Year- Onyia Emmanuel, 300 level, Economics department.
To cap the event, a thanksgiving Mass was held on Sunday, 17th June.