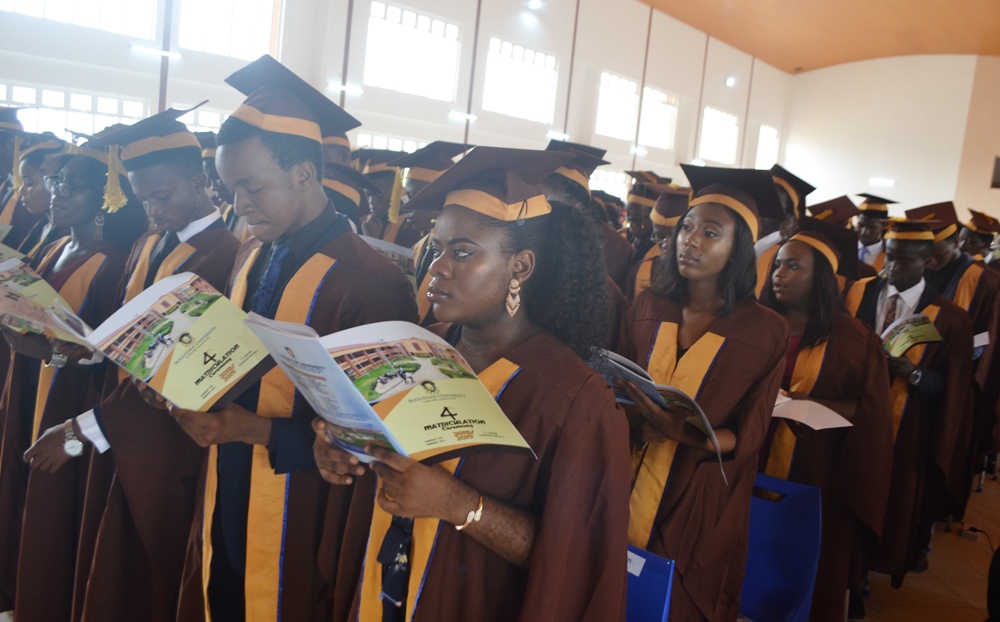 In his welcome address, the Vice-Chancellor expressed gratitude to God for the giant strides achieved by the University in the past one year. The accreditation of programmes by the National Universities Commission, the expansion of the Health Center by an anonymous donor; the donation of the Faculty of Engineering by the Otedola Family; the completion of two blocks of flats for staff housing are some of the numerous achievements listed by the Vice-Chancellor in his address.

In addition, he acknowledged the immense support which the University Management has received from the Proprietor, Board of Trustees and the Governing Council and also the freedom they have given the Management to govern the University according to best practices, without undue interference.

Professor Aderemi Raji-Oyelade, a Visiting Professor from the University of Ibadan, as well as the Dean of the Faculty of Humanities, Management and Social Sciences delivered the Matriculation Lecture. The Lecture titled “STEM to STEAM: Advancing the Potential of Cross-Disciplinary Literacies” reiterated the importance of cross-disciplinary scholarships for national development.

According to the Lecturer, "a university is expected to be a centre of varying disciplines fused into a unilateral hub of knowledge, harnessing the resources of each field in the interest of humanity. The essence is to be able to integrate more, and make the university more resourceful and instrumental in solving the problems of the common man.”

He added that although specialisations are important, in this century, it is those who are capable of crossing the boundaries of the disciplines that will make the difference in the world.

Furthermore, he said that the promotion of scientific inventions without artistic/humanistic interventions is a movement towards mechanistic chaos, as scientific/technological
advancement without ethical consideration of things poses the risk of foisting a generation of Frankensteins on the society.

As part of the University’s efforts to encourage academic excellence, 32 students from 200 level to 400 level were awarded scholarships. Eleven students, who had Cumulative Grade Point Average (CGPA) of at least 4.50 over a total of 5.00 made the Vice-Chancellor’s list; while twenty-one students with CGPA between 4.00 and 4.49 made the Dean’s list.

Also, a male and a female student each, were awarded a scholarship of N 100, 000 each for being the best behaved students.