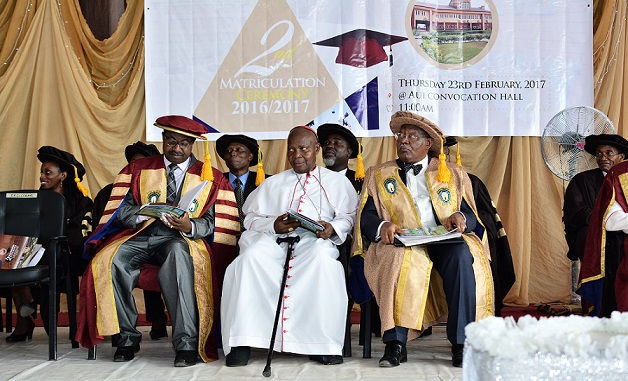 The Matriculation Ceremony of the second set of Students of Augustine University was held on Thursday, 23rd February, 2017 in the Convocation Hall of the University.
The ceremony was well attended by parents as well as invited guests. Notable among the guests at the ceremony was the immediate past Executive Secretary of the National Universities Commission (NUC), Professor Julius Okojie OON, the Permanent Secretary, Lagos State Ministry of Education, Mr. Sina Odeyemi, the Onitori of Orile Itori, His Royal Highness, Oba Dr. Adebisi Adebayo, the University Visioner, His Eminence Anthony Cardinal Olubunmi Okogie, Representative of the Proprietor and Chancellor of the Catholic Archdiocese of Lagos, Msgr. Anthony Obanla and many other distinguished personalities including the Representatives of  the Vice-Chancellors of Caleb University and Pan Atlantic University.
One of the high points of the ceremony for the 2016/2017 academic session was the recognition given to the 200 level students who excelled in their academic performance during the previous session. Prizes were awarded to the six students on the Vice-Chancellor’s Honour list and three students on the Dean’s Honour List
As it is the tradition, this year’s Matriculation Ceremony had a lecture titled “Educating the Human Person: A Conceptual Analysis“ which was delivered by Professor Joseph Omoregbe, a renowned Retired Professor of Philosophy from the University of Lagos.
The ceremony climaxed with the solemn taking of the Matriculation Oath by the Matriculating Students.